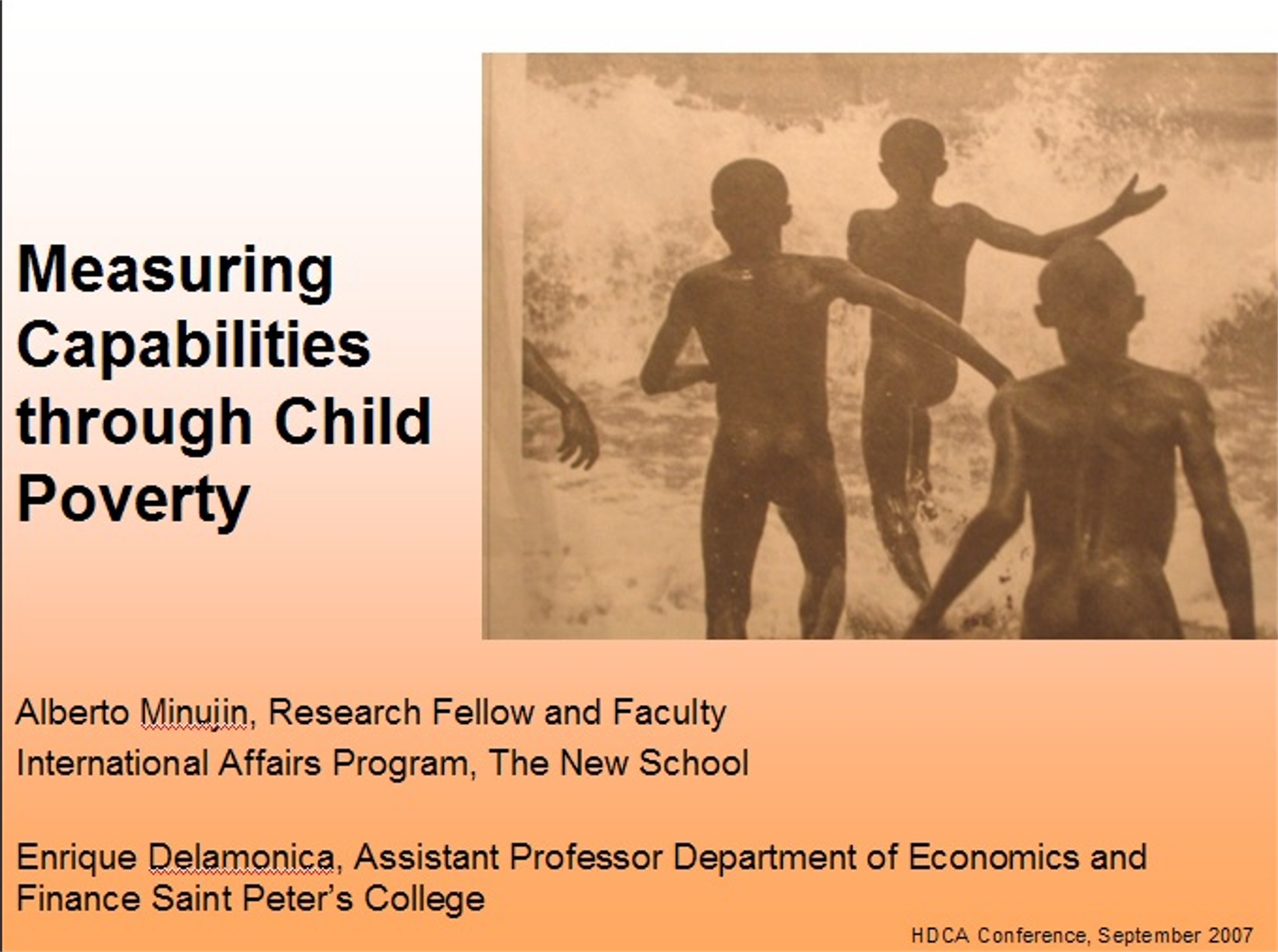 Amartya Sen’s work on poverty can be classified in three categories.  One aspect deals with the refinement and accurate description of income poverty.

His path breaking contributions regarding the axioms that a poverty measurement should adhere to laid the groundwork for the widely used Foster-Greer-Thorbecke (FGT) index. Secondly, Sen has forcefully argued that poverty and well-being should encompass more than income and economic growth. Thus, a measure of poverty should incorporate non-income dimensions (e.g. direct measurement of unsatisfied needs). Moreover,  as a third point, these non-income dimensions should not be conceived  merely as based on “needs” or “utility” but on intrinsic human values  (“capabilities and functionings” in his words) which are related to  human rights.

In this paper, we endeavor to present a methodology which captures  and integrates these three strands of Sen’s thought for the analysis  of child poverty. We construct a child poverty measure which allows for the calculation of incidence, depth and severity of child poverty. Then we show how this measure can be combined with estimations of income poverty to simultaneously classify children according to the different dimensions of child poverty (i. e. income and non-income). Finally, we explain how this is related to child rights.

In the first section of the paper, we take the first ever estimate of child poverty in developing countries.  This was done by calculating the percentage of children in developing countries who suffer from deprivation in at least one of seven indicators which are internationally recognized as characterizing poverty. This results in an estimate of the incidence of poverty. We extend these results. Two countries could have the same proportion of children living in poverty, however, the actual plight of children could be very different depending on how many deprivations they suffer on average (the depth of child poverty). Even if this average were the same in two countries, they could be unevenly distributed (the severity of child poverty). We use regional data to provide an applied example of this approach.

In the second section, we analyze the shortcomings of using income poverty for the description of child poverty. Nevertheless, if there are income shortfalls in a household, children will suffer. Thus, it seems it would be interesting to integrate an income dimension to the measurement of child poverty. Rather than “adding” it as another dimension in the approach described in section 1, we propose creating a two-by-two classification where children could suffer from income-poverty or non -income poverty, or both or neither. Unfortunately, calculating child poverty this way is difficult in practice as surveys which gather both income and non income data are needed. These are time consuming and costly, which means they are less common than household surveys which only gather non-income data. Nevertheless, many surveys do provide the required information. Thus, we are able to present two country examples applying this methodology.

In the final section, the link between these measures of child poverty and child rights is explored. This involves asking question about whether all child rights violations constitute child poverty or not and how to measure child rights violations. Also, the links between the capabilities and the human rights approaches is explored. This allows us to highlight the similar problems they face when measuring the actual living conditions of children.