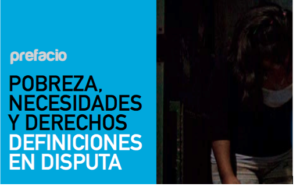 Introduction of Issue No. 22 of “Voices in the Pheonix”
For centuries, the issue of poverty has been woven into a complex web that includes the production and distribution of goods as well as the power relations of our social, political and economic environment. The issue involves both the political and the social sciences including economics, becoming a territorial dispute in which it is impossible to assay a single, “neutral” language.

The present issue of Voices in the Phoenix is dedicated to these issues and proposes a debate that is both pluralistic and polyphonic.

This introduction explores a vast field of conceptual and methodological discussion rather than risking preconceived or already-constructed definitions. The reflections of the sociologist Georg Simmel on “poverty” and “the poor”, for example, present an interesting starting point. Prior to stabilizing and fixing the meaning of this category, we are reminded that “poverty” involves social relations that change over time and that are based on assistance or on the extension of social protection. Defining the target populations for such interventions is not an obvious exercise. Defined as both “absolute poverty” and “relative poverty”, comparisons and calculations that posit thresholds of need and satisfaction are at stake. If, as Karl Marx argued, one of the peculiarities of the labor force with respect to other means of production is that the determination of its exchange value involves a cultural-historic factor linked to the set of goods that define a “market basket”, the same applies to the populations that make up the “reserve army of labor”, the “marginal masses” or the “excluded”.

However, the relational and historical character of the manner in which societies have designated and defined the problem of poverty should not be reduced to a purely relativist logic, destined to sink into pure nominalism. On the contrary, it should deal more honestly with the complexities that make up the question of material needs and their thresholds, as well as those involving participation and inclusion in society without discrimination of any kind or character.

Indeed, all this refers to a nodal aspect of human nature, a condition that produces its own material, social and civic life. This production includes goods that satisfy immediate needs, as much as others that tolerate more mediation. Yet, even more basic needs have experienced different modes of satisfaction and, therefore, historical definition. Far from pretending to dissolve this tension, it seems more prudent to keep the tension alive in order to do justice to that which exceeds the various historical and cultural boundaries of “needs”: our basic vulnerability. Far from the liberal fantasies of Robinson Crusoe, we alone cannot produce our material life. On the contrary, we are “doomed” to social interdependence.

Poverty, then, is not so much a relation with (the absence of) certain goods as it is a social, economic and political relationship. Even prior to becoming an object of the social sciences, the issue of poverty has been subject to diverse representations of common sense. This has been the case across the ages with respect to its definition, causes, consequences and the ways in which to confront it. These ideas are based on certain assumptions that are explicit, but also on others that are not visible. The reflection on this latter point highlights the network of relations about knowledge and power that come together in the construction of poverty as a problem, in the designation of the affected populations and the desirable solutions — constructions which are often presented as “already given” and “evident.”

If on the one hand the question of poverty is inextricably linked to the demarcation of needs when being proposed as an object of state intervention, it is then re-inscribed as a matter of definition of the right to satisfy them This is not without tensions, as the concept of “needs” is not always consistent with a broader definition of poverty as a violation of human rights and capacity building.

The predicament of poverty in modernity has emerged as indissolubly linked to the notion of citizenship and the idea that proclaims all men free and equal. The definition of this equality and the rights ascribed to it has resulted in a central political problem for our societies. The circumscription of universal citizenship to the field of civil rights was soon superseded by various struggles and mobilization seeking to encompass political and social rights. In turn, the political and social rights have resulted in a new source of political disputes about the precise definition of what the state should ensure, from employment to wellbeing and consumption. Similarly, the definition of the various subjects of these rights would always be problematic. In light of the recurring problem of the scarcity of resources, it would be derived from constructing a series of priorities that place some needs over others. Thus, the extension of citizenship and rights entails the thorny question of their limits and ranking in the very likely case they result contradictory.

Until recently, the “scope of citizenship” question seemed condemned to a fate of restrictions and limitations based on the progress of the so-called Washington Consensus and neo-liberal recipes. These pointed to the market and to close communities of family and neighborhood as rightful indices of life’s material aspects. As a counterpoint, Latin America and Argentina display the State’s emergence as a relevant actor on social assistance, social protection, the formation of labor markets and, in some cases, the market in general. In this scenario the State emerges not only as a guarantor and protector of economic and social rights, but also as an active promoter of progress and change.

The analyses of these processes, present in many of the papers in this issue of Voices in the Phoenix, expose reflections that also serve as a warning: the modes of managing social issues are always open to historical contingency and strategic re-articulation in light of the transformative power of relations in various fields. Indeed, the definitions of “rights” included under “citizenship” are not “already given”. They involve conceptual and fundamentally political disputes. It is the convergence of many actors that characterizes the subject of poverty, among them social science experts: economists, anthropologists, social workers, statisticians, doctors, lawyers, sociologists, historians and speech analysts. All of them and others have had something to say about the issue of poverty that brings us all together. In this special, two-volume issue of Voices in the Phoenix, we find traces of these and other voices. The various articles invite us to think about the complexity of a problem that is marked by disputes.

Now, it is important to note that the inescapable quantitative and qualitative multidimensionality of poverty does not attempt to conceive the construction of this problem as elusive and ubiquitous. If, as we indicated in the beginning, poverty is primarily a social relation, it is then inscribed in a larger network centered on the articulation of capital and labor. In different conceptual terms, Robert Castel argues that the problem of poverty is one of the many and most urgent symptoms of the social issues, that paradoxical tension emerging from the contradictions between an ideal based on notions of equality and freedom and the submersion of a part of the population in conditions that threaten not only their citizenship but their human condition (the manner in which it is socially defined) as a whole. Lastly, if “poverty” is a social relation as we have stated, one of its most important links will be with “wealth”.

The articles in this special issue of Voices in the Phoenix invite us to reflect on various facets of the problem, its causes and its singularities. We have divided the work into two volumes with four axes of discussion.

The papers in the first axis, “Society and Poverty: A Historical Perspective”, address the definition of this phenomenon as a fundamental problem of the capitalist mode of production in general, and more specifically the political and social institutional singularities that characterize the case of Argentina. The work of E. Grassi, L. Golbert and S. Álvarez Leguizamón in this volume, and JL Moreno, Vommaro and C. Daniel, P. Aguilar and A. Grondona in the second, take up the history of definitions of poverty over the last two centuries, addressing its overlaps and contradictions as an object of diagnostic and political intervention.

The second axis, “Diagnosis of the Present: Income Distribution: Market and State”, proposes a study of the structural macro-dimensions, as well as of the economic and social protection policies that have influenced the recent evolution of poverty in Argentina. Here, the works of L. Beccaria and R. Maurizio, R. Cortés, B. Kliksberg E. Cimillo and G. Calvi in the first volume, as in M. Novik, H. Palomino, A. Marshall, S. Hintze and C. Danani, E. Roca and J. Lindenboim in the following, contain reflections of the labor market, an essential consideration when addressing the issue of poverty.

The third axis, “Poverty as a Constellation of Social Problems”, presents a plurality of issues associated with concerns about poverty. In the first volume, the papers include those by S. Murillo, D. Born, E. Delamónica and A. Minujín, R. Mercer, M. Di Virgilio and C. Rodriguez, while the second includes articles by A. Capuano, V. Llobet and A. Minujín, E. Faur and E. Jelin, G. Kessler and C. Arza. Each article address different perspectives on the unequal distribution of wealth and, sometimes, the manner in which addressing the problem intensifies its severity. “City”, “childhood”, “health”, “housing” and “education” form a heterogeneous and incomplete list of themes that further describe the world of poverty and the state interventions meant to address it.

Finally, the fourth axis, “Current Debates and Alternatives”, presents controversies surrounding the forms of intervention on behalf of the issue of poverty. In this volume, the block includes works by JL Coraggio well as by M. Bekerman and M. Palomino. These texts provide us with an interesting picture of the alternatives currently under discussion, particularly those associated with the world of the social economy. The second volume includes contributions by P. Arcidiácono and C. Zibecchi, N. Borghini, C. Bressano and A. Logiudice, as wells as J. Martínez Franzoni, who offer compelling debates about the universalization of social protection, its scope and limitations.

We hope the interdisciplinary format of both volumes results in a tempting invitation to the reader interested in a problem that calls upon us, always, with a sense of urgency.

To read the original article in Spanish, download Issue No. 22 of Voces en el Fénix in its entirely by clicking here.