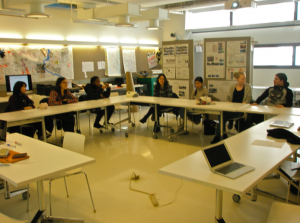 On Friday, March 6, 2015, seven 10th graders from the United Nations International School (UNIS) joined Equity for Children (EFC) for a campus tour and workshop on child poverty, inequalities and climate change at The New School. “This is really a fantastic opportunity for teenagers to see themselves as college students and to discuss global issues in a university setting”, commented Günay Salazar, EFC’s Program and Research Director, who facilitated the visit in cooperation with the New School Welcome Center and UNIS for the second time.

This year’s workshop focused on various dimensions of child poverty and the impacts of climate change on children. A short video on child poverty in the U.S., Hard Times Generation, produced by the CBS broadcast 60 Minutes, stimulated a vivid discussion among the 15 and 16 year old students.  “We have never seen U.S. children speaking so openly about how it feels to be poor.  Mostly adults talk about poverty”, commented one of the students.

After watching the video, students divided into two groups and brainstormed the list of deprivations outlined in the documentary.  They highlighted the “lack of food, electricity, shelter, possessions, [and] privacy” as well as the general helplessness of the children and their families.  Then students rated the deprivations according to the importance of their impact on a child’s life.  They described the greatest impact as “the family’s material inability to care for their children, poor living conditions, [and] lack of outside support –specifically psychological, academic and economic”.

The students, originally from Korea, Mongolia, Japan, South Africa, Brazil, and the U.S., identified the most disadvantaged children in their home countries.  Responses included “single-parent children”, “youths of color and those with non-mainstream religions”, “children who cannot communicate in the mainstream language of the country” and “indigenous children”.

The group soon broke out in a lively debate about social protection services, their relevance and their impact.  Salazar moved on to provide an overview of the effects on children of climate change, which exacerbates inequalities for the most vulnerable.  She highlighted the importance for poor communities, especially children, of deriving their own solutions in order to maintain their dignity.

The EFC workshop, conducted annually, provides a platform for students to think deeply about the meaning of poverty, inequality and its specific impact on children.