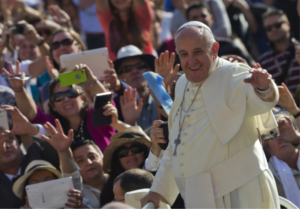 Catholic officials hosted a landmark climate change-themed conference at the Vatican, the latest in Pope Francis’ faith-rooted campaign to raise awareness about global warming. The summit, held on April 28 and entitled “Protect the Earth, Dignify Humanity. The Moral Dimensions of Climate Change and Sustainable Development,” drew together a combination of scientists, global faith leaders, and influential conservation advocates such as Jeffrey Sachs, Director of the United Nations Sustainable Development Solutions Network. UN Secretary General Ban Ki-moon delivered the opening address, and organizers say the goal of the conference is to “build a consensus that the values of sustainable development cohere with values of the leading religious traditions, with a special focus on the most vulnerable.”

According to a preliminary schedule of events for the convening, attendees hope to offer a joint statement highlighting the “intrinsic connection” between caring for the earth and caring for fellow human beings, “especially the poor, the excluded, victims of human trafficking and modern slavery, children, and future generations.”