An Active Life: Opportunities for a Childhood in Movement 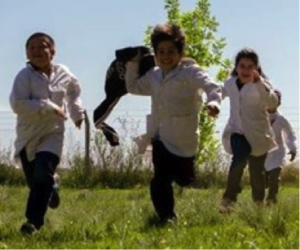 Experts from Argentina, Chile and Brazil met in Buenos Aires to discuss the habits of children in terms of their body and movement within the region. Participants also focused on the prevalence of physical inactivity as a contemporary phenomenon linked to the emergence of massive use of the internet and the multiplication of screens. The meeting, convened by the Arcor Foundation in conjunction with Equity for children and the Tres de Febrero University (UNTREF), was held on October 15, 2015, at the Borges Cultural Center in Buenos Aires, Argentina.

This discussion topic is crucial to ensure that space, time and resources are taken into account in public policies so that children can exercise their rights to an active life. Gustavo Moreno, Coordinator of the National Physical Activity Program for Health in Argentina, warned that in the country, 8 out of 10 children have sedentary practices. Moreno stressed the importance of school programs that promote physical activity in early childhood. For his part, Victor Matsudo, shared the experience of Agita Sao Paulo in Brazil, which is a program currently replicated in over 100 municipalities where it has contributed to the reduction of sedentary lifestyles by 70%. This is program is particularly relevant in Brazil as the country comes in second in terms of the highest percentage of children with obesity, with 52% of the child population in 2015 considered to be obese. Finally, Fernando Concha Laborde, from the Sports Schools Program in Chile, had the entire audience participate in a 3 minutes marathon. He later underscored the importance of investing in children, noting that for every dollar invested in early childhood the State saved between 8 and 14 dollars in the future over the course of these young persons’ lives. Concha Laborde also noted the link between these investments and laying the groundwork for healthy and independent older adults.