Climate Change, Cities and Youth Engagement at The New School 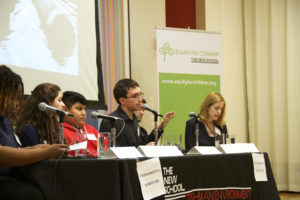 On November 19, 2015, Equity for Children hosted an event at The New School entitled “Climate Change, Cities and Youth Engagement”, co-sponsored by the Tishman Environment and Design Center.  The afternoon seminar had three main objectives:

Mary Watson, Executive Dean at the Schools of Public Engagement, gave opening remarks, followed by Equity for Children Founder and Executive Director, Alberto Minujin, who introduced the discussion topics for the afternoon.  Minujin highlighted the need for thinking critically and taking a fresh perspective on climate change and youth engagement.

“Often kids try to do things differently and society tells them to continue doing what has been done in the past, but certain things need to change.” Alberto Minujin, Executive Director, Equity for Children

Sheridan Bartlett, Co-Editor of the journal Environment and Urbanization, provided background and context to the issues at hand.  Bartlett’s presentation focused on the way in which climate change specifically affects the poorest children and exacerbates global inequity.

“The people who are most seriously affected by climate change are also the people who have contributed the very least to it.” Sheridan Bartlett, Co-Editor of the journal Environment and Urbanization

Bartlett unpacked how those most affected are unable to prepare and cope with either large disasters or small incremental changes in the environment, leading to intellectual and physical stunting among the world’s most vulnerable youth as well as depression, anxiety, and a general lack of hope for the future.

Presentations of catalytic youth-led or youth-focused initiatives as well as a panel and group discussion, moderated by Equity for Children’s Senior Advisor, Samantha Cocco-Klein, followed.  The panel consisted of four adolescents and a young person working with youth to combat the effects of climate change.

Zakeeyah Harris and Jefferson Diaz, two youthadvocates, respectively 18 and 13 years-old, who represented the Ironbound Community Corporation (ICC), based out of Newark, NJ. Zakeeyah and Jefferson have chosen to focus their efforts on the need for alternative fuel sources for the power plants that have created numerous health and safety hazards in their neighborhoods located within Ironbound, NJ and Newark, NJ.  As Environmental Justice Youth Leaders within theircommunity, Zakeeyah and Jefferson also fight to raise awareness about various otherhealth and safety hazards that plague Newark’s schools and projects, including sewage treatment sites, trash incinerators, and other toxic locations created by the production and disposal of agent orange.

Amanda Cronin, a sixteen-year-old junior at Horace Greeley High School, is passionate about food activism and the reduction of one’s carbon footprint through diet. She shares her views through her blog Gourmanda.  Amanda is also an iMatter youth council leader. iMatter has created various campaigns driven through the actions of youth including iMatter March and iMatter Now.  The former is a march that provides a forum for youth to assemble and demand that their opinions on climate change be heard. It has currently been held in over 200 instances, within 45 countries. The newest campaign of iMatter is iMatter Now, a plan to awaken cities regarding climate change and to create a world that is fossil free by the year 2040 through developing youth teams within cities and schools.  For additional information on i-matter, please click here.

Alex Loznak is a first year Columbia student and rural Oregon native.  Alex is one of twenty-one plaintiffs who, along with Oregon based non-profit, Our Children’s Trust, is currently involved in a class action lawsuit against the Federal Government.  The plaintiffs assert that the government has violated the youngest generations’ constitutional rights and failed to protect public trust resources.  They are pursuing a court order, which would mandate the President to immediately implement a national plan to decrease atmospheric concentrations of CO2 to a safe level.  It is the wish of Alex and Our Children’s Trust that youth worldwide take inspiration from their lawsuit and take similar action against their own government.

Anze Zadel is currently a PhD student of the Public and Urban Policy Program at the Milano School for International Affairs, Management and Public Policy. Anze is exploring community participation and its effects on housing and health policies and outcomes, in NY and Lagos.  He is a facilitator of the Amenawon Solar School Initiative (a 2014 New School New Challenge Project) in Lagos.  The initiative seeks to build a sustainable school campus, through solar power and other sustainable practices, in Lagos, to serve as a model in sustainability practices.  After conducting an inclusive needs assessment, Anze and his team created a curriculum for sustainable living and education, which they disseminated to the local population through workshops.  The team also developed a harvesting system for rainwater, which entailed creating collection devices, building a rooftop prototype and writing a manual for the personal collection and filtration of rain water for community members.

Following the panel, the discussion was opened up to the audience.  Panelists were asked complex questions about children’s capacity to exercise their personal agency, how their own actions in the U.S. advocate for the internationally marginalized, as well as how the paths of child advocates change as they grow older.  One key lesson learned highlighted by the panelists was to encourage child and youth engagement on climate change issues. Because, often, children are expected to be seen and not heard, people tend to take notice when a young person does speak up.

“Youths should demand change in the world, not ask for it.” Zakeeyah Harris, ICC Youth Advocate

Read the event program here and check out the resources on our mobilization one-pager here.

Watch the full video below: