Including Youth and Child Citizens in the Urban Agenda 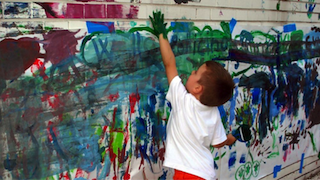 Although 70% of global GDP is generated in cities, child poverty and inequality continue to be persisting characteristics of urban environments. In Latin American cities, one in every three children grow up in precarious households while in a large metropolis like New York, 30% of children live in poverty. Over half of the world’s people – including more than a billion children – now live in cities and towns, many without access to basic services, thus unable to enjoy the “urban advantage”. Everything is available – just not for them.

While increasingly more youths live in cities, it is during the first months and years of life that the cerebral, emotional, physical and psychological capacity of a person develops most. To ensure that societies are just and peaceful, local governments must design and implement specific actions focusing on childhood wellbeing in urban environments.

In advance of the October 2016 United Nations Conference on Housing and Sustainable Urban Development, Habitat III, which aims to set a more inclusive and sustainable urban agenda for cities across the globe, it is crucial to examine how urban environments affect child development and how they can contribute to improving early childhood wellbeing.

On April 28 and 29, over a two-day conference entitled Urban Inequities and Children, Equity for Children convened high level U.S. and international researchers, local government representatives, multilaterals agency directors, and foundation representatives to discuss how to improve public policy and urban design to ensure quality early childhood development in cities.[1] In his opening remarks, Equity for Children Founder and Executive Director Alberto Minujin highlighted the importance of looking at cities and focusing on inequalities in urban development by including children in the urban planning process. Minujin stated, “Children can be the cornerstone of social change, inclusion and sustainable development. Only once we guarantee the wellbeing of children is it possible to break the cycle of poverty and inequity. However, the problem is that they are frequently absent and dismissible in the urban agenda.”

David Anthony, Chief of the Sustainability and Policy Action Unit at UNICEF, warned that, “In certain cities children from the poorest slums are four to five times less likely to have access to water and sanitation. It is always the poorest children that are least able to resist a crisis. When disaster strikes, the richer children have coping mechanisms, whether it’s a drought, a flood or hurricane, or an economic shock, the richer kids have coping mechanisms…”

Inequalities occur from the first years of life and are rooted in situations that are independent from the children themselves. Florencia Lopez Boo, Senior Social Protection Economist at the Inter-American Development Bank, presented data from Latin America indicating how mothers with a higher education level are more likely to use childcare and to send their children to a private organization. Lopez Boo stressed that when children do not have access to quality early education, “by the time they start school, [they] have deep language and cognitive delays.”

Alberto Cimadamore, Scientific Director at the Comparative Research Programme on Poverty (CROP), University of Bergen, Norway, argued that to overcome inequities it is necessary to look at the causes leading to childhood poverty. “We need to focus on poverty production as much as on poverty reduction in order to have a systemic view to provide. The notion of development needs to be readdressed, rethought and eventually changed otherwise we will not be able to deal with equity and poverty eradication in the 21st century.”

One of the main challenges with early childhood public policy is identifying and monitoring information about issues and dimensions affecting the most vulnerable populations. Basic early childhood data and information exist, for example in terms of health and access to early education centers, however this information is seldom placed within a local context or disaggregated by population groups. This makes it more difficult to implement targeted actions focusing on the most vulnerable sectors and populations.

As Alberto Minujin pointed out, “more and better information is needed in key social policy areas to guarantee wellbeing and quality early childhood development.” For instance, more information is needed on play time and spaces for babies and families, on the conditions and quality of shelters in which young children grow up, and on the safety and accessibility of roads used for daily commuting. This type of data would shed light on a series of local policy areas that generally do not take into account early childhood. These areas include but are not limited to infrastructure and urban design, water and sanitation services, public lighting, pedestrian walkways, public transport and shelter. They are crucial in helping to ensure children grow up in a safe and child-appropriate environment.

In addition, given that in the first years of life children depend entirely on their caregivers, the whole family’s wellbeing must also be included within policies and actions targeting childhood. This requires a reframing of the way in which local contexts where children live are understood. As David Anthony argued, “We need to start thinking about the child in the family and not separate from the family.”

Benita Miller, Executive Director of the New York City Children’s Cabinet, highlighted that to achieve comprehensive policies a better coordination of local government agencies is needed. “One of our biggest challenges is trying to develop a policy framework, a singular vision among the agencies to think about our investments in children, the way we develop programs, the way we develop policies across agencies that serve the needs of children. We sometimes like to work for children, but not with children and definitely sometimes not with their families. So it makes it difficult to track policy and practice across a range of agencies that are in the best interest of children.”

Highlighting the difficulties of working with children, David Anthony pointed out, “we never let the kids in because the children may tell us things we don’t want to hear… To really find solutions that work for the poorest children, we have to include them.” To this effect, Meg Gardinier, ChildFund Alliance Secretary General, recommended implementing child-friendly accountability efforts to ensure children are meaningfully taken into account in the follow up and review of the United Nations 2030 Agenda for Sustainable Development. “Components of it are allowing children to express their needs and identifying problems and solutions,” Gardinier highlighted.

As all speakers pointed out, in most cities there is still a long way to go to guarantee child participation. “We need to find ways to measure what children want and need, and to incorporate this into urban design,” stated Mariana Alegre, Program Director of Lima Cómo Vamos.

For Michael Cohen, Professor of International Affairs at The New School, traditional urban practice is dominated by architects in building design, by engineers in terms of infrastructure systems, and by municipal managers. “The largest architecture schools do not offer courses on the environment, economics, social policy, and definitely do not consider the idea of children while planning.” Cohen, who is co-lead of the Global Urban Futures project, focusing on the Habitat III process, states that, “this conversation is amazingly timely because [the discourse] about the Sustainable Development Goals is at a moment where there has been broad discussion about the ‘what’ and not about the ‘how’.”

How to Address Urban Inequities

The Bernard van Leer Foundation presented their Urban95 project, which aims to improve wellbeing in early urban childhood. The premise is that if a city is to be made livable for everyone, planning from the vantage point of a toddler is the best place to start. The presentation included a description of the municipality of Sao Paulo’s experience implementing a program to recapture public space and to use it, namely, as a crime deterrent. With this project, “two things are happening at once, kids and families are getting spaces to play in much closer to home but also it is in the city’s interest to use this initiative as a way of reducing different forms of crime and violence,” commented Michael Feigelson, Executive Director of The Bernard van Leer Foundation.

The Citizens’ Committee for Children of New York (CCC NY) and the Bogotá and Lima Cómo Vamos representatives of the Latin American Network for Fair, Democratic and Sustainable Cities and Territories presented their work collecting evidence and creating mechanisms of citizen social accountability to improve advocacy with local governments. These initiatives use data to identify needs and opportunities across neighborhoods, boroughs and citywide, and to influence budgets, legislation and program development at the local level as well as at the state level. CCC NY has an online database of 400 indicators of child wellbeing, Keep Track Online, and produces a bi-annual publication, Keeping Track of New York City’s children. Bogotá Cómo Vamos, in partnership with Equity for Children, started a childhood wellbeing and inequity survey that was replicated in seven cities within the Latin American network and is in the process of being scaled up to other cities within the region.

Finally, Roger Hart, Director of the Children’s Environments and Research Group (CERG) at the City University of New York (CUNY), and Bijan Kimiagar, Project Director and Research Associate at CERG, presented their experience incorporating the voices of children in local city management through the use of citizen scorecards. The scorecards are distributed by CERG researchers to children to monitor the conditions within their communities. Through the use of this methodology, caregivers can express the needs of young children who do not yet have the capacity to voice their own concerns. “We don’t focus on wellbeing, but on children’s assessment of the conditions within which they live. We examine the conditions that affect their wellbeing,” commented Roger Hart.

Including Children in the Urban Agenda

Through this discussion, Equity for Children sought to examine not only what urban inequities affect children but how to address them. Minujin concluded by underscoring many of the points raised during the conference about how to ensure children are mainstreamed in the urban agenda while giving possible directions for future discussion and debate. These include:

[1] On April 28 and 29, Equity for Children in partnership with the Center for New York City Affairs hosted Urban Inequities and Children at The New School. The two-day event included speakers from more than 10 countries, representing the New York City Children’s Cabinet, UNICEF, the Children’s Environments Research Group at the City University of New York, the Comparative Research Programme on Poverty (CROP) at the University of Bergen, Norway and the Latin American Network for Fair, Democratic and Sustainable Cities and Territories. Participants discussed overarching frameworks and highlighted practical key actions to identify and overcome poverty and inequities affecting urban youth. Find out more at www.equityforchildren.org.