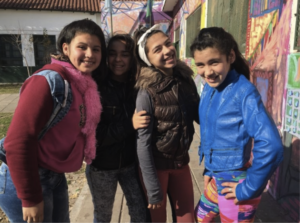 The Buenos Aires International Field Program, led by Professor Alberto Minujin, closed off its seventh session on July 25, 2016. Throughout the eight weeks of field research, the group of six New School graduate students connected with two communities within Greater Buenos Aires: Villa Inflamable and Isla Maciel. Driven by creativity and an eagerness to propel the challenges faced by communities surrounding the Cuenca Matanza Riachuelo, the multifaceted team launched, www.vocesdevecinos.com. At the core of Voces de Vecinos is a documentary, featuring vecinos (neighbors) sharing what it is to live and work in the margins – physically and socially. Serving much more than just a documentary landing page, the site evolved into a robust media package and resource hub for scholars, neighbors and future students to access source information on the Riachuelo.

Children and Urbanization was one of the key overarching themes of the students’ research. Article 27 of the Convention on the Rights of the Child states that every child “has the right to […] a standard of living adequate for the child’s physical, mental, spiritual, emotional, moral and social development.” However, these standards are absent from life alongside the Matanza-Riachuelo, and to deny them is to deny a child’s human rights.

In Villa Inflamable, numerous homes lack sanitation and running water. In Isla Maciel, the streets are plagued with violence. Large-scale primary and secondary schools in both communities are non-existent. To add to these injustices, there are no health care facilities in sight. Research shows that in places like La Cuenca, where basic necessities such as schools, proper infrastructure, and family wellbeing are not guaranteed, children tend to suffer more than others in the community. This is in large part due to the fact that limitations in infrastructure prohibit adequate health and education (Child Poverty in the Developing World, 26). Furthermore, when a family struggles financially, limitations occur in children’s development.

However, children’s rights are often the last to be considered. Without governmental support, basic needs are not met, increased stress and health issues occur, and safety is compromised. After speaking with residents, many expressed the difficulties that children face due to failing infrastructure and inadequate family resources.