Release of the Urban Inequities and Children Conference Report 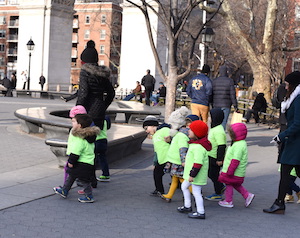 This publication, Addressing Urban Inequities and Childhood: Advancing the Agenda for Children and Cities, is based upon conversations and discussions held at Equity for Children’s April 2016 Urban Inequities and Children Conference at The New School in New York City. During the two-day event, nearly 100 international researchers, government representatives, foundations, advocates and practitioners deliberated about underlying local challenges facing urban children from the ages of birth to five, and highlighted possible solutions. The conversations were framed around the following questions: How can children’s equity be successfully incorporated into urban agendas? How can early childhood equity be successfully incorporated into the Mayor’s office agenda on urban planning and design? How can actions to improve child wellbeing and equity positively impact the broader urban population and society in general? How can we better identify urban planning initiatives and other changes affecting cities that also benefit early childhood?

Over half of the world’s people – including more than one billion children – now live in cities and towns. These figures are set to increase in the coming years. By 2030, the majority of the world’s urban population will be under the age of 18.[i] At the same time, cities are often more unequal than the countries in which they are located. Many children growing up in cities lack access to basic services and are unable to enjoy the ‘urban advantage’. Everything is there, just not for them.

In comparison to their rural peers, urban children can at first appear to be doing better. However, when the urban data is disaggregated, greater income inequality emerges.[ii] Moving into cities does not automatically entitle children and their families to access better or more socially and economically inclusive lives. In Latin American cities, one in every three children grows up in precarious households while in a large metropolis such as New York, 30 percent of all children live in poverty. Children and adolescents living in poor urban areas of Latin America, Africa and Asia-Pacific, are unable to access the services and quality of life that urban living is expected to facilitate, specifically in the area of housing conditions, infrastructure and access to services.[iii]

At the same time, 70 percent of global GDP is generated in urban areas. Cities are increasingly “formidable engines to achieve development”[iv] and incubators for sustainable development, with the capacity to cultivate solutions that resolve poverty, social inequalities and even climate change. When the city becomes the space where equity is possible and children make up the majority of the urban population, then we must ask ourselves: How are children faring in their rights to the city and in their potential?

Find out about our Five Recommendations to include children’s voices in the urban agenda here.