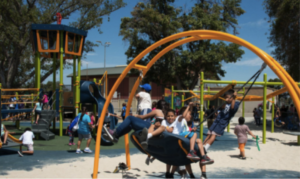 The issue of poverty in the American school system is not a new one. Public schools have traditionally had to grapple with the issues of how to address childhood poverty in the context of limited state and federal resources.[i] The addition of charter schools via the school choice program[ii] has led to further racial, economic and gender-based segregation between students in the public-school community and students in the charter school community[iii]. The number of charter schools who accept students from only higher-income backgrounds has increased, thus concentrating low-income students in other schools and further racial and economic segregation. The National Center for Education statistics reports that 75% of African American and Hispanic youth in the United States attend schools where their peers are categorized as low-income.[iv] I will examine the context of racial isolation that exists in charter schools in Newark and in Chicago and the factors involved that create a social context for racial segregation to flourish. By isolation, I mean the siphoning of young black and Hispanic students into schools where they represent the majority and come from middle to lower socioeconomic classes. They have little interaction with white students, particularly white students from wealthier backgrounds. My recommendations include equitable funding of public schools, broadening access to high-quality pre-school programs, reducing segregation and isolation, and adopting effective school programs and a high-quality teacher workforce to ensure that all students, regardless of income level, receive the education and the services they need to thrive.

According to the National Center for Education Statistics, 75% of African American and Hispanic Young people attend schools where classmates are categorized as low-income.[v] In 80 out of 83 cities, at least half of black students attend a school where most classmates qualify as poor or low income.[vi] For black students, Newark ranks #4 in the category of black students attending low income schools. Chicago ranks #11 in the same category. In 53 cities, 80% of Hispanic students attend low income schools.[vii] For Hispanic students, Newark ranks #2 in this department. Chicago again ranks #11 in terms of concentration of Hispanic students in low-income schools. In Chicago, 96% of black and Latino students attend majority poor schools. The causes attributed to rising levels of racial segregation include: 1) rising residential segregation: the concentration of low and high-income children attending separate schools based on the neighborhoods in which they live, and 2) Peer problems, geographic mobility and challenges in attracting good teachers have made it difficult to provide high-quality learning experiences.[viii]

The History of Racial Segregation in the Charter School System

The official poverty rate was first adopted under the Johnson Administration in 1969.[xvii] The U.S. Census Bureau determines poverty status by comparing pre-tax cash income against a threshold that is set at three times the cost of a minimum food diet in 1963, updated annually for inflation using the Consumer Price Index (CPI) and adjusted for family size, composition, and age of householder.[xviii] The Federal Poverty Measure does not include government spending for programs that assist individuals with various expenses. Every September, the U.S. Census Bureau releases an updated of the national poverty rate for the prior year. In 2015, there were 43.1 million people in poverty, 3.5 million less than in 2014.[xix] For fiscal year 2016, the poverty threshold for a family of four with two children under the age of 16 came to $24,339.[xx]

The Supplemental Poverty Measure was developed to account for government spending directed at low-income families not included in the original poverty thresholds.[xxi] The Income-to-Poverty ratio, which measures a family’s income to the income required to exist in a state of poverty, reveals that 20 million Americans have incomes of less than half the poverty threshold for FY 2011.[xxii] Absolute Poverty Measures specifically identify income thresholds to apply varied family configurations as the defining poverty level. Relative Income Measures characterize the income of low-income families by comparison to others in the income distribution, usually the median.   Both are used to parse the poverty rate in the United States.

Causes: Concentration of Racial Segregation in Public Schools in Chicago and Newark

Although concentrated largely within lower-income neighborhoods in large urban school districts, charter schooling has failed to disrupt substantially the concentration of poverty. In the cities of Chicago and Newark, there is a huge concentration of low-income students within the public school system. The City of Chicago Public Schools contains over 75% of low-income students.[xxiii] A handful of smaller, surrounding districts in the Chicago area also feature 75% of low-income students and those shown in lighter brown have 50 to 75% of low income students.[xxiv] The causes for high rates of poverty and racial segregation within the Chicago public school system can be attributed largely to high instances of race-based residential segregation, in which blacks are shuffled into the poorest communities, and thus, whose children are forced to attend low-income schools.

In the city of Newark, most of those schools range from 50% to over 90% of children in families falling below the 130% income threshold for poverty.[xxv] Similar to Chicago, inner urban fringe districts have high concentration of low-income children. The interesting thing to note is that a handful of charter schools within the city have much lower concentrations of low-income children, in the range of 40-50%. The reason for this is because these schools operate within a “choice” model among city school children, where some schools serve smaller shares of low-income children, others necessarily end up serving higher shares. Thus, the presence of charter schools within the Newark City Public School system may invariably exacerbate income and racial segregation among school children.

The impact of being racially and socioeconomically segregated from wealthier students presents many challenges for students in the low-income population. They have less peer-to peer interaction daily, which largely serves to disadvantage them. Segregating students by race and economic background also increases the cost of improving child outcomes by requiring more targeted educational interventions, such as tutoring, and opportunities for socioemotional development and supplemental services for children. Finally, given the current Presidential administration, political support is on the decline, particularly for additional resources in low-income areas. President Trump has mentioned that he wants to eliminate $1.2 billion in funding for afterschool programs which service 1.6 million children across the United States.[xxvi] This would invariably disadvantage low-income students, many of whom rely on those programs because their parents work full-day shifts and cannot supervise them once the school day lets out.

While charter schools may improve diversity in some cities that can be outlined for best practices, such as New York, there have been some cities such as Chicago and Newark, where charter schools have not only decreased diversity, but concentrated a significant number of students from similar socioeconomic and racial backgrounds into the same schools. The current approach is not sufficient, because there has been an increased in the number of charter schools in Chicago and Newark, and those schools have only served to further deepen the racial and economic divide between students. By the same token, funding for public schools has declined in both Chicago and Newark, and students who would benefit from attending public schools are now forced to attend charter schools, where teacher quality may not be as good as those found in the public school system and most students belong to one income class and racial category.

7. Improving the Measurement of Poverty – Continue to expand the official definition of income to include government spending targeting low-income families and to recognize the differences in cost of living across regions.

Rachelle Suissa is a candidate for the Master of Science Degree in Nonprofit Management at the Milano School for International Affairs, Urban Policy and Management. She received her first Master of Arts in Political Science from Brooklyn College, and her Bachelor of Arts Degree in history and women’s and gender studies from Pace University. Ms. Suissa has served as President of the Brooklyn-Queens Chapter of the National Organization for Women (NOW) for the past four years, and prior to that she served as Vice President of the Chapter for 6 years. Ms. Suissa’s professional goal is to start a nonprofit that helps train women in 14 states the skills needed to run for public office at the local, state and national levels of government.

[ii]School choice is a term for K–12 public education options in the United States, describing a wide array of programs offering students and their families alternatives to publicly provided schools, to which students are generally assigned by the location of their family residence.

[xiv] Frankenburg and Siegel-Hawley (2012). “Not Just Urban Policy: Suburbs, Segregation, and Charter Schools.” Journal of Scholarship and Practice, Vol 8, No 4.