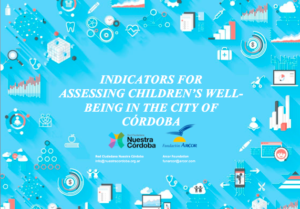 The city of Córdoba in Argentina recently carried out its first geo-referenced study to examine the inequality gaps facing children in different residential areas.

The report, entitled “Indicators for Assessing Children’s Well-Being in the City of Córdoba,” was produced by Red Ciudadana Nuestra Córdoba and the Arcor Foundation, with technical support from Equity for Children. The study examines the material well-being (housing conditions, access to services and basic infrastructure), health, education, recreation and leisure, and spatial distribution within the city of the child population under the age of nine.

The findings reveal that the lowest-scoring areas in terms of children’s well-being are in the south and east of the city, and that these areas also have the largest populations of children under nine years old. The highest percentages of households with Unsatisfied Basic Needs (UBN) were identified here, ranging from 28% to 48%.

This geo-referenced analysis allows us to hone in on areas with a high proportion of young children and the resulting pressure on local services including health care, education and cultural services.

Geo-referencing identifies the parts of the city most in need of attention; however, for many of the indicators sought there is a lack of key public information to evaluate the difficulties that children in Córdoba face. These include:

– Preventable Infant Mortality: this ratio is arrived at by evaluating the potential for reducing the number of deaths from causes that could be tackled with scientific knowledge and available technology. More than half of all infant deaths in 2015 could have been avoided, that is 53.6% (more than 100 deaths < 1 year). In 2016, this percentage fell to 48.6% (84 deaths < 1 year). Over the past five years, there has been a 55% decline in reducible deaths.

– How these deaths could have been avoided:

– Inequality by age: The gap in children’s access to education on the basis of age was shown to be 34 percentage points. Older children are nearly twice as likely to attend school as younger ones.

– Spatial inequality: School attendance among 3- and 4-year-olds: In terms of access to education, a gap of 23.7 percentage points was identified between children living in certain areas of the city.

– Spatial inequalities (green space in square meters per person by CPC): Those living in Colón enjoy more than 5 times more access to green space per person

Read the Prologue to the Córdoba study written by Alberto Minujin here.