Playing in the Favelas: Children’s Appropriation of Public Spaces in their Community 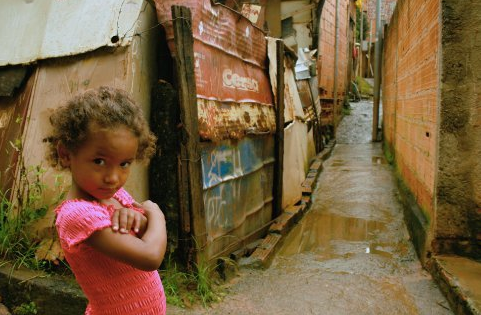 Playing in the city implies not only meeting the demands of leisure, health, and child development, but also using common space in an ephemeral and innovative way, favoring the interaction between neighbors and emotionally linking citizens to a specific place through the action that happens in it.[1] In 1989, it was established in the Convention on the Rights of the Child (CRC) that play is a universal right of any individual, and at the same time, an instrument of social policy. In this sense, play was and remains subject to the whims of social and political designers. In Brazil, the Statute of the Child and the Adolescent, article 16 subsection IV of law N° 8.069 (1990), points to the right to play and to sport as different aspects of the right to freedom.[2]

However, most of the time, children are not included in decisions around the design of social spaces. For example, the new law “incentivo ao esporte,” approved in 2006, allows companies and individuals to invest part of what they would pay in income tax on sports projects approved by the Ministry of Sports. As a result, the Flamengo football team and brand is using a public space in the community of Tubiacanga -an area close to the international airport in Rio de Janeiro- to build their training center. That space used to be the place where children played after school and in the weekends. In this case, neither the adults, nor the children were consulted when the decision was taken to use and design this public space in their own community.[3]

This article first describes why it is important to include children in the planning of public space in their own community. Second, it summarizes what is being done in this respect in Rio de Janeiro, Brazil and what is not being done. Thirdly, it will outline closing remarks and recommendations.

Nowadays, children’s way of life in large cities, such as Rio de Janeiro, has been affected by increasing privatization, or the appropriation by various institutions, of public spaces previously used for play. However, not all childhoods are alike. Unlike children whose experience is more restricted to private spaces, the children of the favelas – or comunidade – (slums) play outside the home, with their peers, in common areas. In doing so, they are exposed to the issues affecting the neighborhoods where they live.[4]

It appears as if the favela as a whole acts as an informal adventure playground. Children and adolescents experience the unpredictability of the urban environment around them, and their resourcefulness allows them to have fun in their everyday world.[5] Considering the importance of public space as an area of socialization in childhood, the potential of play has also been highlighted as a catalyst in the appropriation and transformation of the city by the children. In this sense, to play materializes a broad form of expression and of citizen participation. According to the CRC, children are full citizens able to claim proper attention and are entitled to rights. Nevertheless, their voices are not taken into consideration when policies are being written.

What distinguishes the favelas from other parts of a city is the ever-changing processes of construction, demolition and reconstruction that prevail in these densely built environments. Historically, residents have built and rebuilt homes over generations, and this process is even more frequent today because of the many external forces pushing towards it. The fluidity between private and public places, the informal and ad-hoc nature of the public spaces and the lack of automobile-based traffic promotes more opportunities for play.

Nevertheless, children have no formal voice in deciding how the public space they use to model their identity, to socialize, and to internalize culture is defined.

A Look at  Selected Programs

The design of public spaces overlaps with issues of citizenship, privatization, and culture. Although these issues are linked to child rights, children´s opinions are rarely taken into account when related public policy decisions are made. Children’s lack of agency in this respect is undoubtedly one of the reasons why public spaces do not always fulfill the function they should and are often converted into non-places, in the terms of Marc Augé. Sarmento[6] also draws attention to the need to build knowledge to address the complexities of children’s existence  and capture their voice without  over-simplifying the experience of childhood.

Several programs have been designed to regulate the use of public space in favelas in the last few decades. However, they seem to be more palliative solutions than structural reforms designed to improve community participation.  The unceasing reconstruction of favelas and the lack of formal urbanization challenges the continuity of the public policies involved.

The program favela-bairro implemented between 1994 and 2008 was developed as part of Rio de Janeiro’s 1992 master plan that stated outright in article 148 and 151, the goal of “integrating the favelas into the formal city” and “preserving their local character.”[7] The Favela-Bairro program, developed by architect and city Secretary of Urbanism Luiz Paulo Conde and approved by the city government, was coordinated by the newly established Municipal Housing Secretariat (Secretária Municipal de Habitação). The program’s charter planned for infrastructure upgrades, social services, real estate regularization, and a crèche in every urbanized favela. Instead of focusing on private homes, Favela-Bairro made public spaces its priority in addition to vowing that each urbanization project “will be widely discussed by members of the community.”[8]

In July 2010, as part of the social legacy of the 2016 Olympics, it was decided that all the favelas in Rio would be upgraded by 2020 through a municipal program called Morar Carioca. This is referred to as “Favela Bairro Phase III.” Learning from Favela-Bairro’s strengths and weaknesses, Morar Carioca pledges to carry out large-scale upgrading (public works to improve water and sewerage services, drainage systems, road surfacing, street lighting, the provision of green areas, sports fields, recreational areas, and the construction and equipping of social service centers), plus land titling and social services, such as education and health centers in favelas.

All of these programs, designed as public policies, modified the landscape of the favelas through the government’s top down approach without any apparent participation from the community in general and children in particular. When these programs were designed, children sometimes participated in workshops, but these were organized for informational purposes only and did not provide space for decision-making or idea generation.

On the other hand, there are other programs designed by the nonprofit sector that work with children through innovative activities in their communities. One of them is Projeto Morrinho,[9] located in the favela Pereira da Silva, created to “challenge the popular perception of the favelas”,[10] demonstrating that the favela is an area of great cultural and social wealth, and not only a place linked to violence. Children participating in this project have the opportunity to intervene in the design of public spaces of their miniature communities. The initiative was created as a game by children that lived in the favela. Today the 19 year-old project is being transferred to a new generation by its creators. This is one of the many examples of successful social program that emerged from the favela and develops urban public agenda with the children.

Another program of note is Vamos Jogar[11], an initiative to mobilize citizens and political commitment, developed by UNICEF and the Mayor of Rio de Janeiro to promote the right to play, recreation and safe and inclusive sport for all children and adolescents in Latin America and Caribbean. The particularly meaningful part of this program is that activities occur within communities; however, these activities are conducted in regulated spaces and children are not at liberty to create.

According to Coelho,[12] the favela children’s relationship with the space where their daily lives take place impacts their feeling of security, freedom and adventure, and contribute to the development of roots within their communities. If they spend their time inside a regulated space, this opportunity is lost.

States must take into account the conditions that define children’s well-being and quality of life, beyond traditional minimal guarantees. They must also design strategies to achieve this goal and develop appropriate knowledge to allow informed decision-making. As noted in Equity for Children’s publication, “Addressing Urban Inequities and Childhood” in April 2016 there is a need to “utilize reliable quantitative and qualitative evidence to understand the drivers of urban childhood poverty and inequality, in order to guide policy and planning; disaggregate and map urban data to create indicators tailored to children’s lived experiences and to uncover important information within and between cities; develop policies more closely adapted to neighborhood and local population needs; collect qualitative information, too, by working with children as well as with their parents, caregivers and direct service providers at the community level to understand the story behind the figures and statistics.”[13]

The opinions of children are not considered in discussions and decision-making about public spaces. Nor are they taken into account in the design of development projects in their neighborhoods and communities.  Engineers and architects hardly observe children or approach them to know their perspectives. They are therefore left out of forms of participation and discussions about the direction of future development in their favela and, more broadly, their city. There is still a long way to go for children to leave “civic invisibility” and to become a part of  social change today.

Many other spaces, besides the field, the court and the streets, can be adapted for sports and leisure, both in rural and urban areas: the beach, the river, the yard, and the patio. It is crucial to continue looking for solutions to this issue and minimizing difficulties. One of the most important recommendations to policy-makers is to include children in public discussions about spaces in their communities as fully participating citizens in the policy making process.

Jesica Kessler has a Master of Arts Degree in International Affairs- concentration Media and Culture at the Milano School from The New School.  She received her Professional Degree Program in International Relations at Universidad del Salvador, Buenos Aires, Argentina. Ms. Kessler is currently the Legacy Coordinator at the Buenos Aires 2018 Youth Olympic Games Organising Committee. She has also worked at the United Nations Information Center for Argentina and Uruguay as Director Assistant. Ms. Kessler’s professional goal is to create bridges of international communication between Governmental and Non-Governmental organizations so that through sport children can know and enforce their rights as well as develop physically, mentally and professionally.