Premiere and Panel Discussion of ‘When Home is the Street’ 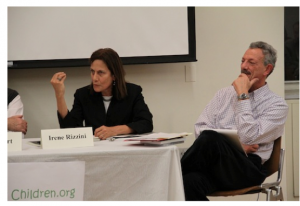 On 30 January 2013, Equity for Children hosted the New York City Premiere of “When Home is the Street” – a documentary short by award-winning Brazilian filmmaker Thereza Jessouroun. The film features adolescents living on the streets of Rio de Janeiro, Brazil and Mexico City, Mexico who open up to the camera with their own stories about why they live in the street, the many challenges they encounter daily, and in some cases, how they were able to escape such dire conditions of poverty.
Following the screening, a discussion moderated by Equity for Children Director Alberto Minujin featured the film’s co-producer and Equity for Children Partner Irene Rizzini, Director of the International Center for Research and Policy on Childhood (CIESPI) at PUC-RIO, Catholic University in Rio and major researcher and contributor to the film; Roger Hart, Professor of Psychology and Geography in the PhD Program of Environmental Psychology at CUNY; and Kyle Johnson, Director of Communications at the Fetzer Institute, a non-profit organization that sponsored the production of this film since it illustrates the transformative power of love and forgiveness in the lives of children living in the street. They talked through core messages of the film as well as the practical and political challenges faced by those responding to the needs of children around the world who are living in the street.

Part of the film’s strength lies in the children and adolescents of “When Home is the Street” telling their stories, in their own voices. Jessouroun’s decision to minimize other forms of exposition and feature the children highlights their vivid and poignant experiences on the street. For Rizzini, their words present a unique perspective that challenges frequent perceptions of street children as threatening criminals.

The children’s stories, and scenes of them with their friends, offer a window into the many hardships faced on the street. Paradoxically they provide insights into why so many children find it hard to leave the street behind. As one adolescent observes, ”You can remove us from the street but it is hard to remove the street from inside of you.”

For Roger Hart, this statement crystallizes one of the key challenges in caring for children who have been living on the street. For many, living on the street offers friendship and love that was missing at home. In turn, the street evolves into part of the children’s identity and often provides a sense of freedom and independence. Hart emphasized that interventions are most successful when children see the alternatives to living in the street as opportunities rather than as imposed mandates. In fact, most interventions that forcibly remove children from the street against their will end with children simply returning to the street.

More successful interventions focus on a gradual process of building trust and mutual respect. The film highlights some children who have benefitted from such an approach. Several have survived the streets and now work to help other children make the difficult transition to more secure and stable living conditions.

As Kyle Johnson of the Fetzer Institute conveyed, these stories illustrate the important role of love, compassion and forgiveness in breaking the cycle of abuse and neglect.

Alberto Minujin echoed the need for mutual respect, noting that most street children are acutely aware that a majority of society views them as criminals and a threat to public safety. This awareness often results in greater exclusion from mainstream society and exacerbates children’s vulnerability to danger and exploitation in the streets. Irene Rizzini also noted that the Brazilian media’s portrayal of these children as dangerous criminals and drug addicts has led, in part, to complacency in reaction to police brutality and violence against children. Rizzini argues that while the child welfare system in Brazil is improving, the issue of displaced children is not adequately addressed when police forcibly clear street children from parts of Rio de Janeiro. According to Rizzini, these policies continue despite adequate expertise and resources but because the political will to make a change is lacking.

Minujin noted that many wealthy countries, including the United States, experience problems related to children living in the street that they frequently fail to confront. The international development community, too, has failed to holistically address the problem. Minujin claims that some approaches fail to address the root of the problem and separates these children even more from society as a whole. Instead, policies and programs must recognize such children as the product of a society that fails to recognize the rights and needs of children and families. As noted by all the participants on the panel, the problem of children living in the street is complex and rooted in multiple forms of abuse and neglect, both within the family and by society at large.

Addressing the crisis of children living on the street requires a holistic response that will recognize all children as valuable members of society, worthy of respect and love. As Rizzini noted, the government cannot do it alone — there must be consistent cooperation between local and national governments, police, media, religious institutions, academics and other civil society organizations. As the film so aptly illustrates, the first step in tackling this crisis is to listen.To watch ‘When Home is the Street’ online, please click here.