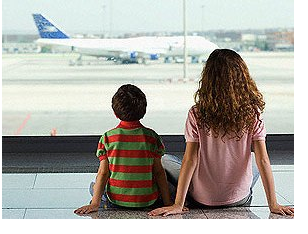 The global world implies complex realities and presents challenges to our established ways of approaching these realities.

At Equidad para la Infancia América Latina we propose a profound perspective on phenomena such as migration and adoption, paying special attention to those processes of inequality (that almost always take place silently, with little attention paid to them) that support these phenomena. Gender, ethnic and class inequality, which directly and particularly impact the lives of Latin American women and children. Processes that reveal the perpetuation of power relations, hegemonic discourses and various forms of violence that shape the relationships between poor or developing nations and developed nations.

To this end, we review a series of contents and readings that offer various analyses on migration and adoption, with emphasis on the Latin American situation, which from a critical perspective offers evidence of the existence of social assumptions and imaginaries that legitimize and build unequal practices and procedures. Such is the case of international adoption, which was fashioned around the assumptions and the narrative of abandonment, and through which the orphaning of poor children and took on the meaning of being an act of charity. This has uncovered not only illegal practices and procedures, but has also naturalized structural practices of inequality. Here we are dealing with texts in which multiple voices – often voices that have been hushed – are combined, such as those of the very protagonists for the case of adoption, the voices of the families of origin.

Interview with Rodolfo Casillas
Rodolfo Casillas, a specialist at Flacso México, presents a historic examination of the motives that lead children and adolescents to migrate, specifically from Mexico to the United States, detailing the reasons for the migration. He makes a distinction from the perspective of gender, focusing on the experiences of women and girl migrants.
Links: Write-up available in Spanish and Portuguese. Video interview is in Spanish.

Migration, Care and Sustainability of Life
This work undertakes an analysis of the links between Bolivian women that migrate outside of their country, leaving their children in the care of their grandmothers, sisters, sister-in-laws or female neighbors.
Links: Article available in Spanish and Portuguese.

The Silence of Adoption in Spain
The article analyzes the reasons for the “silences” that do not allow people to speak of the triad: biological families, adoptive families, and children, ten years after the beginning of transnational adoption in Spain.
LInks: Article available in Spanish and Portuguese.

From Guatemala to Ethiopia: Modifications in International Adoption
This material offers an analysis of the current situation of adoption in Ethiopia, comparing it with the recent situation in Guatemala. It reveals the practices and processes that mercantilize the poorest children and capitalizes the vulnerability of their families.
Links: Article available in Spanish and Portuguese.

On Kidnappings and Adoptions
Through the analysis of cases of children appropriated and given for adoption during the last military dictatorship of Argentina (1976-1983), the publication explores the institutional devices, bureaucratic routines and social meanings of those years in relation to adoption.
Links: Article available in Spanish and Portuguese.

The Place of the Family of Origin
The text offers an overview of a debate on the role of the family of origin in adoption and the process of adoption, as well as the place of the genetic family in assisted reproduction.
Links: Article available in Spanish and Portuguese.

Facebook
Twitter
LinkedIn
PrevPreviousPartnership Between Equity for Children and the Department of Childhood Studies, Rutgers University
NextStart with a Girl: A New Agenda for Global HealthNext