Between Measurement and Action: Debates on Child Wellbeing — Tucuman, Argentina 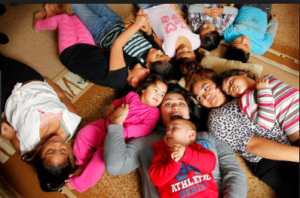 This two-day conference, held on September 4 and 5 in Tucuman, Argentina, was organized in partnership with UNICEF and the Argentine Secretariat of Public Management and Planning. The seminar featured a presentation by our Executive Director, Alberto Minujin.

Currently, the total global population living in urban areas reaches 54%, and it is expected to rise to 66% by 2050. LAC experienced a rapid urbanization process since the 1950s, and it is the most urbanized region, with more than 80% of its population living in urban settings (about 500 million people). In this region alone, three out of four children and adolescents live in urban areas, which is equivalent to 115 million people (UNICEF, 2016).

In LAC, although the absolute population in rural areas has remained fairly constant since the 1950s, the region’s urban population is now five times what it was then. The intensity of the rural-urban migration has declined and has been displaced as the main migration feature; today population movements predominantly occur as urban-urban flows. A poverty gap persists between urban and rural areas, but in many countries the size of the rural population will limit the extent of this movement. LAC’s urbanization process has started to slow down, but still will continue to bring more of its people to urban settings in the years to come. Recent urbanization trends show slower growth rates of megacities due to lower levels of rural-urban migration and greater intra-city migration, as well as higher growth rates of mid-size cities (IDB, 2015).

Regarding income poverty reduction, LAC has made important progress throughout the last two decades. The proportion of poor individuals has fell significantly (from 27.5 percent in 1992 to 12.6 percent in 2011). Specifically, the region reduced child poverty from 54 percent in 2004 to 36 percent in 2014. Similarly, extreme child poverty was almost halved over the same period from 33 percent to 18 percent (World Bank, 2016).[1]

Inequality as measured by the Gini index, also fell by approximately 10 percent during the 2000s alone. But even with recent progress, the region is still the most unequal in the world, with a Gini coefficient slightly below 0.5, followed by Africa 0.45, Eastern Europe and Central Asia 0.35 (UN Habitat, 2016). LAC is also home to eight of the ten most unequal countries, including Brazil, Chile, Colombia, Costa Rica, Haiti, Honduras, Mexico, and Panama (World Bank, 2016). There is still not a unique pattern that defines the development of inequality in urban areas in LAC, but the clearest trend is that inequality in urban areas has grown faster than in rural areas (CAF and UN Habitat, 2014).

Inequality in urban areas has become more evident over the years with the rise of informal settlements, and their high concentrations of people living in precarious housing conditions and lacking access of good quality services. The widening of the urban divide, is a serious challenge faced by many urban areas in LAC, which is often expressed by the rise of intra-urban inequalities and growth of urban violence.

A recent UNICEF study in eight LAC countries (including Colombia, Costa Rica, Dominican Republic, El Salvador, Honduras, Panamá, Perú, and Uruguay), found that half of urban children and adolescents lives in precarious housing conditions (which considers features like overcrowding, unsuitable housing materials, and lack of access to water supply). Such study found that one in every five children lives in low levels of precarious housing, and three out of ten live in highly precarious housing (UNICEF, 2016).

Other indicators also show worrisome conditions of children and adolescents living in urban areas. In terms of nutrition, the mentioned study found that although malnutrition of children under five is lower than in rural areas, the intra-urban inequalities are evident. For example, in Colombia the proportion of malnourished children living in highly precarious housing conditions (19%) is more than double than those children living in non- precarious housing (9,2%) (UNICEF, 2016).

Also, regarding education and opportunities for young LAC citizens is the out of school and out of work phenomenon, known as “ninis” (ni estudian ni trabajan), which is the group of people between 15 to 24, who neither studies or works. Currently, LAC has more than 18 million ninis of which 12 million are women. 66% of ninis in the region belong to the poorest two quintiles. Although as a share of population, ninis are more prevalent in rural areas than in urban areas, given the high urbanization rate in the region, the majority of ninis, close to 13 million, lives in cities (De Hoyos, Rafael et al, 2016).

Currently, the three leading causes of death among people 15-29 in Latin America and the Caribbean are external causes (including homicides and traffic accidents), degenerative diseases, and communicable diseases, including HIV/AIDS, influenza and pneumonia, TB, among others (UN DESA, 2013). Many of these causes, such as the homicides and traffic accidents, as well as exposure to communicable diseases have a strong connection to urban settings, making young urban dwellers, more exposed to such dangers.

An additional concern is the urban violence that has risen in various LAC cities. Currently, Latin America hosts 43 out of the 50 most violent cities in the world, including 19 in Brazil, eight in Mexico, seven in Venezuela, four in Colombia, two in Honduras and one each in Guatemala, El Salvador and Jamaica[2]. The growth of urban violence is closely related to the increase in youth violence, in which young people are both victims and perpetrators. Deaths by violent acts and homicides in the 15-24 age group accounted for 43% of the total mortality in this group and young men are especially vulnerable to homicide (UN DESA, 2013).

The links between youth and violence (including school-based violence, street crime, gang membership, drug consumption and trafficking, and gender-based violence, among others) are complex and highly inter-dependent. Beyond individual-level characteristics, poverty, inequality and exclusion in urban areas are directly linked to youth violence (UN DESA, 2013). These conditions are often related to economic crises, a decline in the standard of living, urban marginality, socialization in aggressiveness and crime from an early age, and frustrated expectations when their higher levels of education fail to guarantee better job prospects. Central American countries deserve closer attention given the influence of transnational criminal networks and easy access to small arms.

UNICEF in LAC is actively working to address the multiple needs of children and adolescents living in urban areas. Some examples include the work to strengthen social protection programmes and services that aim to reduce poverty and inequality. Worth highlighting efforts such as in Peru, where UNICEF is starting dialogues to support the urban poverty reduction strategy “Prospera”, which emphasizes the need to expand social protection and quality social services to the poorest urban populations.

In terms of health, UNICEF is working on issues regarding the prevention and attention to communicable diseases and disease that mostly affects poor urban environments, such as Zika. Worth highlighting the comprehensive support provided by UNICEF, so that children and families affected by Zika receive adequate attention, as well as greater visibility to the issue of children with disabilities is addressed by national and subnational government authorities. UNICEF is also working on the reduction of road traffic injuries by promoting awareness and prevention activities.

In the areas of child protection and education, UNICEF has made violence prevention a priority in every country in the region. Specific initiatives include the efforts to prevent and respond to armed violence in Central America and the Caribbean, through the Violence Prevention and Response (AVPR) initiative, which is mostly focused on urban areas. The programme works in multiple countries, emphasizing community participation, advocacy, evidence-building, public awareness and school-based initiatives. It also helps build the capacity of local institutions to tackle armed violence in a comprehensive manner. Worth highlighting the work in El Salvador, which started in 2011 in the municipalities of San Marcos and San Martín, which were among the most violent in the country. By 2016, these were no longer on the list of the 15 Salvadoran municipalities reporting the highest number of homicides. The APRV programme has supported alternative mechanisms for settling disputes, such as community mediation centres that seek to resolve conflicts through peaceful dialogue. To reduce the risk of violent gangs recruiting vulnerable out-of-school children, UNICEF has also worked with municipal authorities to identify and monitor students who are at risk of leaving school and – where possible – re-enrol those who have dropped out. The Ministry of Education has adopted this model for replication in other municipalities in El Salvador, including Santo Tomás and Ciudad Delgado.

Lastly, UNICEF is working towards reviving the Child Friendly Cities initiative at the regional level, with the aim of creating a platform for policy makers and practitioners and enhance visibility of the needs of children living in urban settings. A diagnostic of current initiatives is being developed and consultation with key actors is taking place in order to create a regional space that promotes dialogue and exchange of best practices and lessons on the subject.

See the September 4 and 5 agendas below:

Watch the video of the conference in Spanish: