My internship at Equity for Children 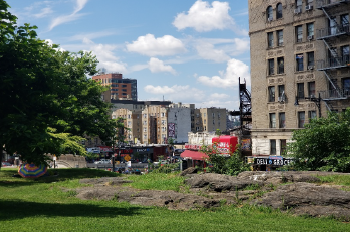 Below, is an article by Equity for Children’s summer intern, Bryce Williams. Bryce is a 16-year-old high-school boy from the Bronx, NY. During his 6-week internship with us, he learned about the multiple aspects of poverty and how we measure them. He read material about the differences between dollar-a-day poverty thresholds vs. a holistic approach to measuring poverty.

At Equity for Children, we advocate for measuring child poverty to build knowledge and understanding of its scale and scope. Multidimensional measures can get closer to a children’s felt experience of poverty. The effects of poverty in childhood can last a lifetime, affecting the development of their minds and bodies, also, contributing to perpetuating the inter-generational cycle of poverty. Disaggregating this data can highlight how children are disproportionately affected by multidimensional poverty. 1 of every 3 children suffer from hardship or deprivations, lacking basic necessities such as adequate nutrition and clean water. Even in rich countries, children experience poverty, nearly 1 in 7 children are multidimensionally poor.

One of the thematic areas of the work we do at Equity for Children involves including adolescents and youth participation. Children have their own agency and their opinions are key to inform policy and develop effective programming that child-sensitive and mindful of their wants and needs. That is why we asked Bryce for his take on multidimensional poverty and his felt experience living in the Bronx.

My name is Bryce Williams, I’m 16 and I go to All Hallows High School in the Bronx. I live in the inner city, I am an active leader within my community and hope to be an entrepreneur. During my internship at Equity for Children (EFC), I learned about the meaning of multidimensional poverty and how it is measured. Poverty is not only what you lack in your pocket or bank account, but it also involves what you lack socially. Health benefits, nutrition, education, whether you have a roof over your head, or live in a crime driven neighborhood creates the definition of poverty. The lack of these aspects affects the wellbeing of a child.

Poverty is a very personal experience and it is felt differently by each person. I believe poverty is an all-around deterrent for you to succeed in life, whether it’s due to the lack of education or your financial status. You are lacking the necessary tools to succeed.

Also, I learned that children are especially vulnerable to poverty because they have special needs. Children are not physically capable of working strenuous hours and have laws protecting them from working at all. Many children cannot nourish themselves properly which affects the developing of their body and mind, but also within that process they cannot fully dedicate themselves to their education because they are focused on surviving.

When I had the option of choosing where to do my report; the first place that came to mind was the Bronx. It’s where I was born, raised, and attended school. At school, I learned a lot, even out of the classroom. There were situations that I was put in and surrounded by that allowed me to learn the meaning of poverty, its roots and the best way to avoid it.

Growing up in the Grand Concourse area (Bronx), I saw poverty every day and at a certain point, I began to create my own definition of poverty. I knew it wasn’t limited to the amount of money my family had because I believed I lived a really comfortable privileged life considering I went to catholic school. But then, there were some small things that grabbed my attention like how I couldn’t go to the park across the street even at 15 years old or how my principal wouldn’t let us take out our phones if we were close to the school in fear that we would get robbed or jumped for our things. This had happened in previous years.

Another big problem we face in this area is gentrification, this is due to the rise of upper-class individuals deciding to move into lower-income neighborhoods, paying lower rents and taking over hosing opportunities for the locals. Primarily in the Grand Concourse and Melrose, we have seen the biggest influx of higher-income individuals moving into the city that are much more affordable to live in and have all the conveniences of living in the city.

So the first thing I did was go around my neighborhood to ask some people what they thought poverty was. Here are some of their answers:

I continued to go around the area and interviewed adults to see if they had input considering they’ve had more time to experience poverty. I tried interviewing some homeless people but they declined. At first, I wondered why but then I realized that poverty also affects your dignity and how you are portrayed in society.

As a community, if we don’t understand what’s going on around us then we won’t feel the need to act for change. The best way we can invoke change in our communities is if we begin to address the issue and make it publicly accessible. Not everyone has the luxury of taking a day or even a couple of hours to listen about the problems they already know they have. If people see that there is a way to invoke change in their community they will take part especially if it’s for our youth because they are the future.

If I could do something to contribute to my community it would be to establish programs in which children, adolescents, and young adults can go and begin to understand the working world around them and how they conduct themselves in order to have a better chance at a career rather than a job.